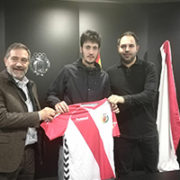 If Cristian Gómez came back a few months ago, now it’s the turn of another local star with a huge fanbase, Cristian Alfonso. The midfielder, who had been training with the team for weeks, has reached an agreement with the club to play until the end of the season.
Alfonso was always one of the star players of Hospitalet, impressing fans with his amazing skills. He originally played three seasons for the team, in which he was capped 99 times and scored 21 goals. His skills soon caught the attention of Espanyol, who gave him his first division debut. However, he didn’t totally fit in at the Barcelona team and was loaned out to Alarcón and then to Girona to play in the Second Division. In the 2015-16 season, he returned to CE L’Hospitalet and then went off to Lleida Esportiu the following year, where he only stayed for one season. Now, after a few months without a team and some weeks training with Xavi Molist’s team, he’s setting out on a new adventure with Hospitalet.
Meanwhile, players leaving the club include Edipo Rodriguez and Kilian Villaverde, who’s heading to Granollers for more pitch time. This departure would only allow the signing of a new under-23 player, something that the club has ruled out, as it’s looking for a more experienced player.

Hospitalet to convert current baseball stadium into pioneering facility in ...
Scroll to top