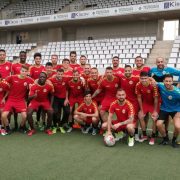 Centre d’Esports L’Hospitalet already knows its first rival in the promotion playoff to Second Division B. The Náxara, from La Rioja, has been the team that has determined the draw held at the headquarters of the Federation Spanish Soccer in Madrid.

Náxara, third place in the sixteenth group, will visit the Municipal Stadium this Sunday at 6:00 p.m. to start the promotion playoff. The Riojan team arrives with a tag of being an offensive team. They scored 111 goals this season, especially at their field, La Salera, where they have only missed six points during the regular season.

L’Hospitalet Coach, Xavi Molist, said “this playoff will be complicated”, as L’Hospi will have to “adapt to their field, with natural grass. Even not having the fame of other teams, that makes them really dangerous.”

The technical secretary, Jonathan Risueño stressed the importance of La Salera, where “Náxera plays a very offensive football, with a great scoring ability, and a very much supporting audience”